When a full-service auto resto- ration shop has a well-established, word-of-mouth reputation like that of Mongoose Motorsports in Ravenna, OH, it can be a hard sell to get them to consider switching products.

But that is what Automotive Art did, and now employees are loving the results on the vehicles they paint—everything from semis to motorcycles and all manner of classic and special interest cars in between.

Owner Tricia Krause said the previous owner of Mongoose Mo- torsports convinced her late hus- band, Gary Krause, to leave his job as a shop superintendent at a diecast company to come work at Mongoose.

Tricia said Mongoose’s previ- ous owner was impressed by the restoration work Gary was doing in their home garage on a 1963 Chevy Corvette Grand Sport body.

Three years later, in 2009, the previous owner wanted to get out of the business after the economy tanked. Gary wanted to buy it.

“It was a struggle in the very beginning because the economy was terrible, but we figured it out for the last 10 years,” Tricia said. 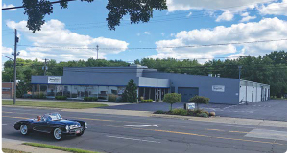 Those Corvette Grand Sports helped get the Krauses’ business off the ground even amidst a bad economy, when Universal Studios asked them in late 2010 to build five identical Grand Sports for its “Fast Five” movie. The order even- tually grew to nine cars, as the studio kept wrecking them while trying to get a shot of the car being stolen out of a moving train near the beginning of the movie.

“That helped us get started, and we are very thankful for the relationship we’ve built with Uni- versal Studios,” Tricia said.

Universal Studios even came back for a Corvette Grand Sport Gasser that was used as an extra in a scene in “The Fate of the Furi- ous,” the eighth movie in the fran- chise.

Mongoose Motorsports used its 15 minutes of fame to start build- ing its reputation.

The shop is licensed by General Motors to build replica Grand Sports, using body molds taken from one of the original five cars. Each one takes a year to a year and a half to build. At this point, Mongoose has built so many, for clients all over the U.S. and even the world, they’ve lost count.

In 2015, the Krauses bought Portage Trim, a nearby upholstery company that used to do work for Mongoose. With that, Mongoose Motorsports became a full-ser- vice restoration company, with the capability to do every inch of a frame-off restoration in-house— fabrication, welding, wiring, uphol- stery, mechanical and paint.

Now the business has grown to 11 employees, 33,000 square feet of production space and another 22,000 feet of enclosed storage space. It typically moves 45 to 50 cars through its doors ev- ery month, doing everything from full restorations to small mechani- cal jobs.

The shop also hosts a huge car show every August, also founded by Gary. Now in its sev- enth year, it has grown to attract 2,000 cars and 10,000 specta- tors.

Sadly, Gary died in October 2020 due to complications from COVID-19. Tricia said she and her employees are determined to carry on Gary’s legacy.

“We built such a strong com- pany,” Tricia said. “I have the best team of guys ever. I could never do it without all the people I have standing by my side. They’re all very special.”

Another area body shop that partners with Mongoose for its

“Tim seemed really knowl- edgeable,” Scott said. “His cus- tomer service is second to none. He showed us some of the new products, we started trying it, and it blows away the older prod- ucts we used from [another com- pany.]”

Since Mongoose Motorsports looks for more of a show-quality finish on its paint jobs, Scott said it was the clearcoats that sold them on Automotive Art.

“They have a variety of clears with different dry times, durability and glosses,” Scott said.

Mongoose Motorsports does not have a mixing station since it generally does not need large quantities of paint, but Scott said any time it needs a particular color, Automotive Art gets it mixed and to them by the next day.

“Their customer service is a lot like ours; they put their custom- ers first,” said Tricia Krause.

“I basically had to tell them there’s no way,” Scott said. “I like the cost, durability and appear- ance. It blows away [our former supplier.]”

Scott said another vendor has a high-end clearcoat that pro- duces similar results, but at nearly twice the price of Automotive Art.

“The cost was a good selling point,” Scott said.

Company At A Glance...